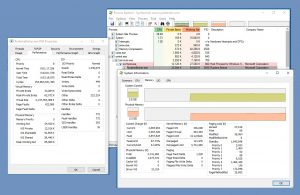 Windows Process Explorer is a free diagnostic utility developed by  Sysinternals, a Microsoft subsidiary.  It provides much more information than the standard Windows Task Manager, and can be downloaded from download.sysinternals.com/files/ProcessExplorer.zip, or run directly from live.sysinternals.com/procexp.exe.

This is part of the Sysinternals Suite of utilities including Process Monitor, etc.   These are generally for Windows Vista/Windows Server 2008 and later versions.

SQLSaturdays are free in-person SQL Server training events held in various locations around the world. These events are organized by the Professional Association for SQL Server (PASS).

Register for an upcoming SQLSaturday event at www.sqlsaturday.com.

PASS also has webinars, podcasts, and other training available at
www.pass.org/Learning.aspx.

Update: PASS is ceasing operations as of January 15th 2021.

Register for in-person Microsoft launch events at various locations around the world at https://launch.visualstudio.com/local-events/.

Online training and web sessions on March 7th and 8th can be found at https://mva.microsoft.com/colleges/visual-studio-2017-launch.