The Windows Subsystem for Linux (WSL) is an optional Windows 10 feature that allows you to run in order to run Bash shell scripts and Linux command-line applications without using a virtual machine.  WSL is designed as a development tool and not as a Linux production tool.  It is installed under Control Panel -> Programs and Features -> Turn Windows features on or off – > Windows Subsystem for Linux. 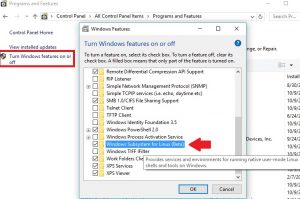 WSL is no longer Beta and is fully supported as part of the Windows 10 Fall Creators Update in 2017.  WSL is also available on Windows Server 2016 Build 1709 or later versions.

Further documentation can be found at docs.microsoft.com/en-us/windows/wsl/about and the Windows Command Line Tools Blog.

Update: WSL 2 is the latest major version change and is available for Windows 10.